Vézelay and its surroundings

Romain Rolland, Paul Eluard, René Char, Paul Claudel, Georges Bataille, Prosper Mérimée, Max-Pol Fouchet, Maurice Clavel, Christian and Yvonne Zervos, Jules Roy and many others frequented the Eternal Hill.
Non-conformists, idealists, in search of the absolute, rebels sometimes mavericks, they are neither lukewarm nor timorous. They all have in common to have come out of the ranks to think alone. It has been said on this Burgundian hill that man could rise to the impossible. The spirit of the place allows the meeting of faith in God and this faith inherent in creation itself which consists in thinking that the impossible can happen provided you give yourself the courage to do so.

Vézelay and the Basilica of Sainte-Marie-Madeleine

The Eternal Hill
The city of Vézelay is located on a high hill, visible for tens of kilometers. This particular geographical situation gave Vézelay in 1793 the name of Vézelay-la-Montagne. Vézelay has always fascinated its visitors: 2 hours from Paris and nestled in the heart of Burgundy (Vézelay is 15 km from Avallon and 45 km from Auxerre), the city is full of old stone wells, ocher buildings eaten by ivy, stalls… Thousands of tourists flock to its steep streets every year.

The Basilica of Vézelay, UNESCO World Heritage village
The Basilica and the hill of Vézelay have been classified as World Heritage by UNESCO since 1979. They are among the first five sites inscribed in France on the list of properties of outstanding universal value. If you come to Vézelay for the first time, you will immediately perceive the magnetism of this true masterpiece of Burgundian Romanesque Art. The Basilica of Sainte-Marie-Madeleine, a 12th century monastic church, reveals architecture, capitals and a sculpted portal of unique beauty.

Every day, new discoveries to be made around Vézelay

Pierre Perthuis (15mn from Vézelay)
Pierre-Perthuis is a beautiful little village located halfway between Vézelay or Saint-Père and Bazoches. La Cure runs along the village and from the new bridge, tourists can admire the old stone bridge below. The effect is striking. Near the village, the “Roche Percée” is a hole six meters high and eight wide, in a limestone cliff overlooking the Cure. This rock, formerly called “Petra-Pertuisa”, would have given its name to the village.

Salt Fountains of Saint-Père-sous-Vézelay (20mn from Vézelay)
Classified as a historical monument since 1936, the archaeological site of the “Fontaines Salées” straddles the town of Foissy-lès-Vézelay and the south of the town of Saint-Père. It is the point of emergence of salt springs, which were exploited for salt or baths from the Neolithic to the Middle Ages. We advise you to visit the Museum which is located near the Church of Saint-Père: its entrance ticket gives access to the Salt Fountains.

Musée d’art contemporain Zervos: it houses the finest pieces from the collection bequeathed to the city of Vézelay by Christian Zervos, an eclectic collection of modern art including small sculptures but also an imposing cast iron relief by Henri Laurens, works by Pablo Picasso and Julio González, Fernand Léger’s first mural.

Rencontres musicales de Vézelay: four days and around ten concerts traditionally focused on sacred music, in the exceptional setting of the Basilica of Sainte-Marie-Madeleine.

Château de Bazoches: built in the 12th century, it has a trapezoidal architecture made up of four towers and a dungeon surrounding an interior courtyard. From the towers, we discover the first reliefs of the Morvan to the south of Avallon.

Château de Chastellux: in the heart of the Morvan, on a rocky peak overlooking the Cure, visit this castle, which was built in the 11th century. Travel back through the history of France in this site listed as a Historic Monument.

Abbaye de Fontenay: one of the oldest Cistercian monasteries in Europe; Founded in 1118, the abbey has survived the centuries without time altering its Romanesque architecture.

Maison Jules-Roy: Jules Roy’s office is preserved as the writer, who died in 2000, left it. Visitors find the atmosphere of work and memories where his last works were born.

La maison du visiteur: The Visitor’s House is an essential stop on the way to the Basilica to understand what makes this high place so exceptional. Through a film and a workshop led by the guides, schoolchildren discover the art and secrets of the builders who erected it more than 900 years ago.

A wine-growing region since Gallo-Roman times Vézelay now has around a hundred hectares of 100% Chardonnay vines, and obtained the AOC and AOP Vézelay label in 2017. A host of winegrowers offer tastings and tours of their estates. Do not miss !

Some essential links to prepare your stay 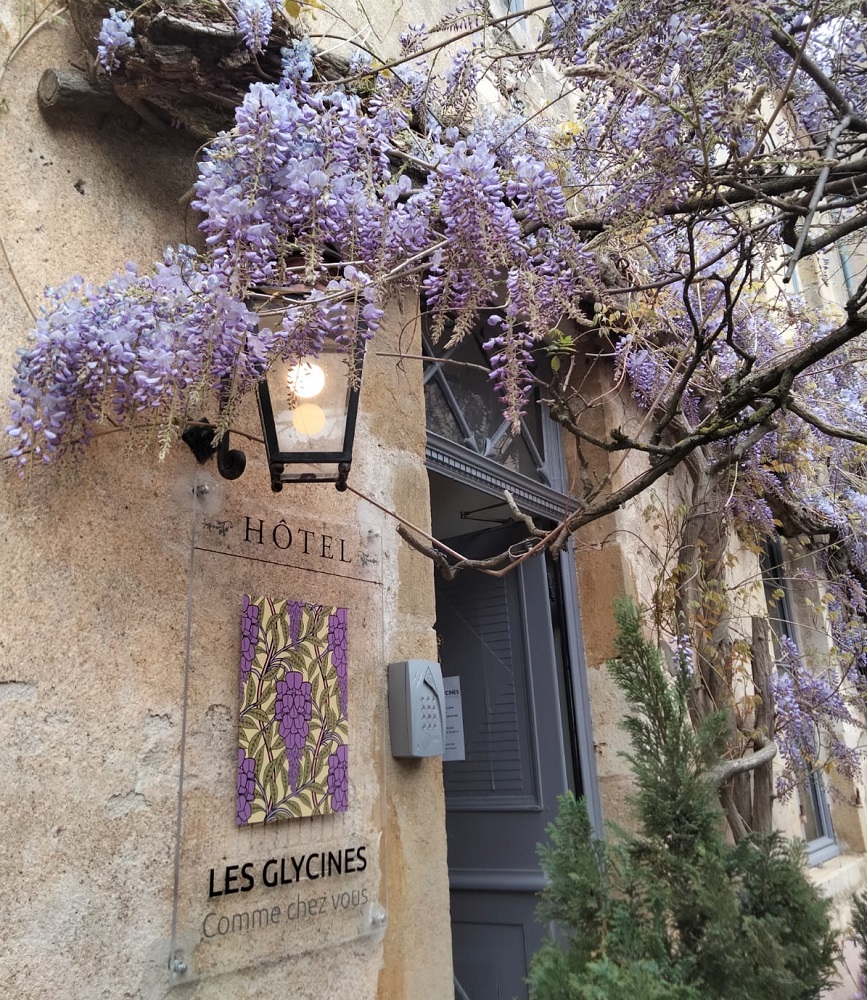 By booking by phone at 03 86 47 29 81, or by email at reservations@vezelay-glycines.comyou benefit from :
– about 5% discount compared to the sites listing our hotel
– free cancellation or modification until the day before your arrival > I make a reservation